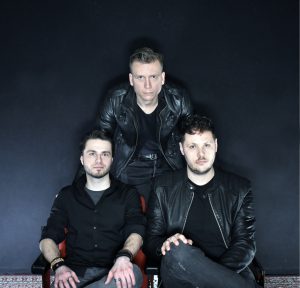 For this months Throwback Thursday we’d like to go back to 2011 to tell you the story of how Layered Reality Productions “adopted” Unforeseen Motion! This all started on a not so lazy Sunday afternoon in Amsterdam where Jelmer, Unforeseen Motion’s front man, had spent the day rehearsing with his old band Grimhorde.

They say practice makes perfect, but one must not forget that practice also makes you hungry. So our front man entered an overcrowded KFC (So classy!) in need of food. With his guitar on his back and his plate full of chicken he was desperately trying to find a place to sit down, and then a voice spoke to him from a corner:

“Long haired metallians, there’s room for you over here!”

Sitting there was Tom de Wit, who he had never met. But metal unites, and so they immediately bonded over their shared love for music. Jelmer had some demos lying around for a new project, and Tom had (and still has!) his studio The Imagineering Suite. One and one is two, so Tom mixed Jelmers demos which were then released by Layered Reality Productions in 2011! So one unforeseen meeting set a lot in motion.

The debut release of Unforeseen Motion is available on streaming services and can be listened to on youtube here: