Fans of progmetal can rejoice, because Avandra is back with a brand new single and video for the song ‘Codename:Pharaoh’!

This song is the first track on the upcoming new album Prodigal which is slated for release on the 18th of November 2022 through Layered Reality Productions.

The band’s singer and guitarist, Christian Ayala had the following to say about the track:

“The cycle of war begins again, and its concept made material. The Eisenhower speech throughout the song warns of the dangers of unifying the private sector’s military industrial complex with the government, which would lead to eternal wars in the interest of war-oriented corporations and bribed congress members. The warning was not heeded, and the events of the album unfold.”

The album will be released on CD digipack format and through all major digital music distributors worldwide.

After a blazing start with 3 music videos and garnering attention as a new band, Apeiron Bound has released their debut album Multiplicity to the world today!

And to celebrate, the band released a full length album visualizer made by artist Costin Chioreanu (http://twilight13media.com/) based on the original artwork made by Darcy Kelly-Laviolette.

Check out the video here:

The album is now available in an extensive digipack including a booklet filled with lyrics, photos and more artwork.

The hype is real! This friday, Apeiron Bound is dropping their debut-album ‘Multiplicity’ and everyone here at LRP HQ is beyond excited to see what you all think!

However, judging on the music videos gathering many YouTube views and with reviewers like Metal Temple calling the band ‘a very promising name in the genre’ and Metal Zenith claiming ‘this album rivalling some of the greatest progressive rock and metal of the last 50 years’, we believe this record will definitely be worthy of your attention!

And feel free to share this teaser around! Cheers! 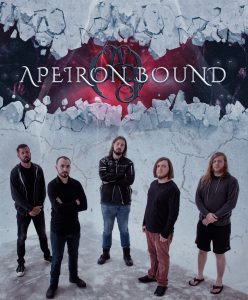 Progressive extreme metallers Apeiron Bound return today with the blistering track Eleutheromania. This song is the third single of their upcoming album Multiplicity that is slated for release on August 26th 2022! The song is a prequel to the band’s debut single “Emotive Servitude”. The song also features a blistering guitar solo by Angel Vivaldi! The visual art in this video was created by Cameron Burns from CaptvArt.

Main writer and guitarist Andrew Stout had the following to say about the song:

“Where Emotive Servitude focuses on the landscape of a dystopian nightmare, Eleutheromania focuses more on the journey of how it got to that point. Where Emotive is a chaotic fiery landscape, Eleutheromania is an illusionary bubble where you reside in a false sense of security oblivious to the world around you. The overall theme of the song touches on the slow dismantling of civilization. It demonstrates how society blindly accepts any role they believe will restore their freedom while the opposite is true.”

The band is now gearing up for the full fledged album release next month and if you like what you hear, be sure to follow the band on their social pages to be there when the album hits!