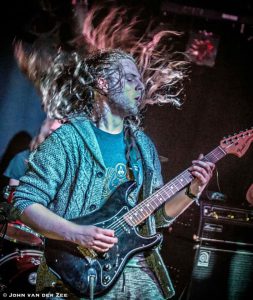 It’s thursday! So it’s time for a throwback! This time, Hillsphere‘s Elias Mayer looks back on a very special video production the band did in 2017, here’s the story:

“In late 2017 we released ‘Our Physical Way of Speaking’. The first official single for the ‘Florescence’ (2018) album which is in our eyes the first actual song of the album as it is also the first one to include vocals. We wanted our debut album to have a slow building intro so when this song comes in it reaches a climax that’s basically overdoing the climaxes from the songs before. It’s the ending mark of the intro and it opens the road for the rest of the album. The real way to listen to it is by listening to the album in its entirety.

Its subject being about an emotional fight between two individuals made us come to the idea to translate its meaning in a choreographic
way. After a period of searching we reached out for two contemporary dancers by the names of Cris van Tol and Tyrone Menig. The fact that they had to write this piece for a dynamically diverging song of five minutes long, in such a short amount of time, was quite challenging. We knew that they were able to make the best out of our idea. Both of them had their fair share of experience being the dance instructors they are and even being known for their appearances on So You Think You Can Dance and Holland’s Got Talent. Although it was a new experience for every one of us, Cris and Tyrone were perfectly able to express themselves in the way we had in mind.

We have had a lot of support for the production of this clip. Our booker at the time was able to grant us the main stage of Duycker, Hoofddorp, our label was able to help us out with the film production and multiple webzines and social media pages helped us to promote
the clip after they discovered it. Looking back at it now we were definitely lucky to have such a team of professionals working with us. We couldn’t be more happy with a result like this for our first videoclip!”

You can watch the video below: