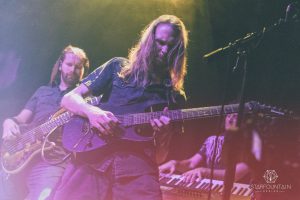 Dreamwalkers Inc‘s guitar-wizard Lennert Kemper remembers the debut-gig of their band in 2016 on a very special occasion, in this first edition of #throwbackthursday here at LRP Extended. He had the following to share:

“In October 2016, we played our acoustic live debut with Dreamwalkers Inc at Kasteel de Berckt in Baarlo, the Netherlands, as part of the pre-party of ProgPower Europe 2016.

For me, this was a very special gig, as playing at ProgPower was a top bucketlist item of mine for many years before. It was ultimately my first time visiting the festival. We were lucky enough to get to stay at the festival for free the entire weekend, which most of the Dreamwalkers Inc members did.

The atmosphere that night (and of course the rest of the weekend) was absolutely magical. My girlfriend and I made many new friends (both fellow musicians and fans) from all over the world that weekend. Since then, we’ve been coming back to the festival every year and there’s never a dull moment.

Thank you so much, ProgPower family, for welcoming us into your little paradise!”