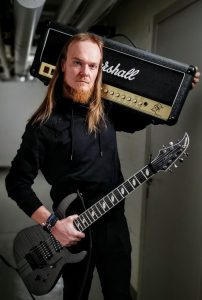 Another thursday is upon us and as we tend to do with LRP extended, we ask the artists of our label about their most memorable past experiences in their musical life! In today’s edition, Bioplan‘s Andi Kravljaca tells us a story of a faithful meeting with a metal icon!

“Our story starts at Pub Anchor on February 11th, 2004 while I was performing with Seventh Wonder.

I remember meeting Yngwie Malmsteen on the street, in 1998. He was out shopping with his wife and kid in the middle of Stockholm, you know, looking like Yngwie, same clothes he wears on stage, pushing a pram and pointing to something in a shop window. At this point I had an absolute obsession with Yngwie, so it was hard for me to separate reality from imagination at this time. But, I did the whole thing. The mouth breathing, sweaty palms, fan boy thing, asking him about the settings on his pedals and about tracks on bootlegs he’d never heard of. And he suffered me so well. So well in fact that he invited me to visit a show he was playing at Stockholm’s main rock and metal place, Pub Anchor, that night. I hung out with members of Europe and Candlemass backstage and was just in a teenage orgasmic heaven.

Six years later, I was standing on that same stage with Seventh Wonder, facing an absolutely packed, sold out venue, and hearing an audience sing lyrics I’d written. I don’t even remember much of the show, but I do remember standing there, backstage, and trying to high-five my younger self through the space-time continuum, saying, buddy… we made it. I still have the pick Yngwie gave me that day, framed on my desk, to remind me that if you can dream it, you can do it.”

Andi is now working on finalizing the upcoming new release for his project Bioplan which will be released by Layered Reality Productions later this year!

You can check out the first Bioplan EP here: