Avandra is gearing up for the release of their new album Skylighting on the 20th of November 2020 and has now dropped a lyric video for the albums’ openingsong Celestial Wreaths!

Celestial Wreaths is an emotional song that was written during the pandemic that is hitting the world right now and the inevitable loss that we have to deal that follows. Written by Christian Ayala and expanded on by his bandmates joined by Vikram Shankar on synths, bringing the songs to new heights!

The songs’ premiere was handled by the website Everything Is Noise and you can find the article and song by clicking the image below: 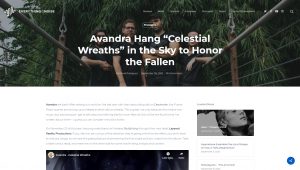 Pre-orders for the band’s new record will start on friday the 2nd of October through bandcamp and the Layered Reality Productions webstore.