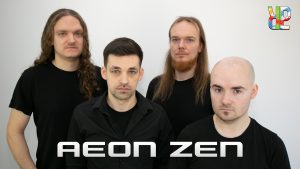 The hype is real, as Aeon Zen has released their music video for the first part of their new release Transversal to the masses today! This 4 minute prog experience gives a glimpse into the musical world that is found on this release!

And the best part is… This is just the beginning! Because on the 24th of September 2021, the complete 30+(!) minute song will be available as a music video on youtube as well to celebrate this albums release and Aeon Zen’s career.

When asked about this video, Rich had the following to say:

“Transversal is the most ambitious album we’ve made and the video definitely mirrors that. Telling the Aeon Zen saga is no mean feat and the video for I: Twilight is just the beginning. Closer to the album release date we will also be debuting a music video for the entire album. As you can see, this first part shows themes from our debut album, and subsequent tracks will continue that idea through Aeon Zen’s entire history, echoing the concept of the music on the album.”

Like what you hear? (Pre)order the album today and get this release (and other merch) in before the release!