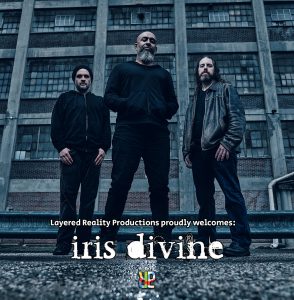 Coming from the United States of America, Layered Reality proudly shares the news that progressive power trio Iris Divine has signed to the labels’ roster!

After releasing two critically acclaimed albums with their 2015 album ‘Karma Sown’ and their 2017 release ‘The Static And The Noise’, the band is now preparing for the release of their third album which will happen through LRP.

The band consists of Navid Rashid on guitar and vocals, along with Brian Dobbs on bass and Scott Manley on drums.

Unafraid to grow beyond their progressive metal foundations, the band fuses punk, pop and alternative sounds into the songwriting of the new album, while heavy riffs, melodic vocals and multiple time changes anchor the band to its roots.

More information about the new album will follow in the coming months, so stay tuned as more is revealed!