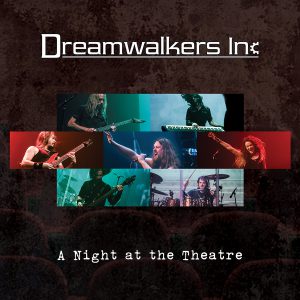 FOR IMMEDIATE RELEASE: Dreamwalkers Inc to release live album + complete concert video on youtube on the 22nd of May 2020!

Dutch symphonic, progressive metal band Dreamwalkers Inc will be launching a live album on the 22nd of May 2020 entitled: A Night At The Theatre which features the complete show that was recorded during their performance at ‘Het Parktheater’ in Alphen aan den Rijn in August of 2019.

The tracklisting will be as follows:

The album was produced by Tom de Wit at The Imagineering Suite and was mastered by Rich Hinks (Aeon Zen, Annihilator).

The band’s singer Tom stated the following about this release:

“Finally! It’s been months of hard work to get this live recording in the best shape possible for release and we are all very excited to share this document with the world! We wanted to create a sound that had all the hallmarks of a proper high end recording, but one that would also present the real, raw energy of our live performance. It’s all there. Warts and all. So you can expect a real live experience. You will only miss the smell really.”

The band also decided that next to the CD and streaming release, the complete performance will also be launched integrally on YouTube on the day of release.

The band said the following about this:

“When playing live, we always record all shows and on this special night and we just wanted to see what would happen if we placed multiple camera’s around the venue and really went out for it. It was a risk, because every liveshow can (obviously) be really good or really bad. We ended up having a great night and we were very happy to see that we had all this footage to work with. So now it’s time for us to get the video editing done so that we can launch something exciting for everyone to see/share in May 2020!”

More information about this live release and the official pre-order for this record will follow in the coming weeks!