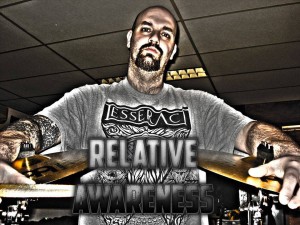 A new project has joined Layered Reality Productions today and it goes by the name Relative Awareness!

Relative Awareness is a Prog/Math Modern Metal project fronted and founded by Jelle Hamstra, who is known for his earlier drumwork in Insidiae, Dimaeon & Despondency as well as his current bands Synovectomy & Alice Day. This project is Jelle’s outlet for his Progressive and Technical heavy ideas that he could not fit in other bands up to this point.

Jelle has written a full concept-album worth of music that will be featuring a rough metallic edge as well as amn intricate proggy side that should not be taken lightly. Besides his Drumwork, Jelle will also take on guitar and vocal duties on this album. He is aided by Janneke Smids on Synths (Ex-Insidiae, Ex-Alice Day) and Jean-Luc Nealon on Bass. (Ex-Insidiae) The project will be expanded with more musicians as the writing and recording proces develops itself.

To celebrate the signing of Relative Awareness to LRP, a special teaser and introduction video has been made to give you all a taste of what Relative Awareness’ music will sound like. This is a teaser which features only Guitars, Drums and some Keys played by Jelle himself. It gives however an overview of what the album will be holding globally.

You can find the teaser below:

The album is fully written and mapped out concept-wise and the production is now underway. The record is scheduled to be wrapped up in 2014 or early 2015. Once the album is done, it will get an official Layered Reality Productions release.

Relative Awareness is also available on Social Media such as: