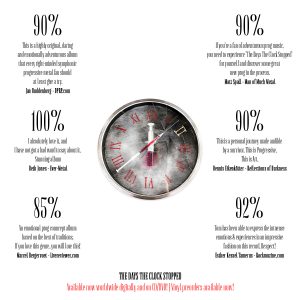 It has been a long journey indeed, but from today onwards, the new TDW album ‘The Days The Clock Stopped’ is available worldwide in it’s CD/DVD digibook format! The album was released digitally on the 4th of December 2020 but had to be delayed physically due to Covid-19 delaying the album’s production.

It’s finally out now and here’s what Tom had to say about this event:

“Finally, the album is now available to the masses through distro’s worldwide! This album, documentary and everything surrounding it has really been a trip and a half to complete, so I am glad to see that it will now find it’s way to the fans! Next step: getting the vinyl in order, because (as is tradition for this album by now) that also still needs to happen, haha!”

As stated above, the album will also be released on a strictly limited vinyl release which is slated to be released in the first half of 2021!

You can pre-order the vinyl and/or get the album at the following links:

Or listen to the album online at: