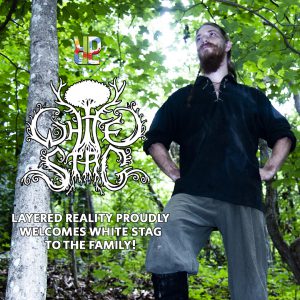 An angry marriage between Jethro Tull, Between The Buried And Me & Vandergraaf Generator… That is how the avant-garde stylings of White Stag can be described and yet that still does not cover the complete spectrum this act seems to cover!

White Stag is primarily the solo project of Richi Worboys who uses this project as his outlet to create surreal musical worlds. Layered Reality Productions signed White Stag based on the compositional strengths of the album “Emergence” and will be releasing a brand new digital single & video on the 1st of October with an album following in the near future!

Richi had the following to say about the signing:

“White Stag is the result of lifelong experimentalism, and the forthcoming era we’re preparing to embark into will be the full culmination of all of this. The upcoming new single will only be the precursor to this journey, and we couldn’t be more excited to share it.”

Curious about what White Stag sounds like? Check out the album Emergence here:
https://whitestagofficial.bandcamp.com/album/emergence

And be sure to follow White Stag on the socials here and be prepared for the new single coming on the 1st of October!