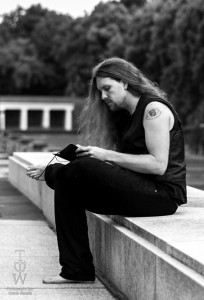 After four months of radio silence, a new TDW update has arrived in the form of another over-the-top newsvideo that stretches the limits of most sane people.

And for those who don’t like the style of these videos, the news has also been posted in text which can be seen below:

…The last couple of months have been incredibly busy with all sorts of matters ranging from Mind:Soul related work (more on that in the coming weeks!!!) and preparation for the next TDW steps regarding music and video.

And to get one thing straight: YES, I KNOW WE MISSED TWO MONTHS WORTH OF VIDEO DEADLINES ALREADY. This is not really our choice (Us being me and the B&M Crew who make the video’s with me) but it has primarely been a matter of time and bad luck. (People getting ill and all flu-like is obviously something you can’t work around.) So there will be new TDW video’s coming up, but it will just take some time as we want the videos to be good. And good stuff takes time. 😉

The second thing I discuss in the video is that I started working on a new song! The new project has the title Lest We Forget and it is a new composition of about 23 minutes worth of material. It’s a song that deals with the psychological steps a person goes through after experience a shocking incident. The incident itself is not explained, but it’s just about the emotions that a person goes through, coping with negativity and sadness. I don’t want to spoil too much about guest musicians and other details, but I can say that this song will become quite a heavy one. 😉

TDW – Music To Stand Around And Feel Awkward ToAnd finally, I can now announce that the digital version of “Music To Stand Around And Feel Awkward To” will also be available on the digital distribution websites in the future. The exact publication date will follow once it is completed and fixed. I have decided to do this, because I know a lot of people prefer Streaming music over downloading it. So it is a logical next step in the promotion and development of this record…”

The TDW album “Music To Stand Around And Feel Awkward To” is still available for sale through the Layered Reality webstore!