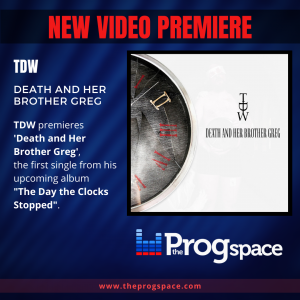 A haunting and intense new music video has been released today by TDW, as he presents the first single entitled ‘Death and Her Brother Greg’ with an exclusive premiere at The Progspace!

Check out the article here: https://theprogspace.com/tdw-premiere-death-and-her-brother-greg/

The hard-hitting video depicts a direct visual description of what it is like to be stuck inside a body that is sick and broken and what that does to someone’s psyche.

This song is a part of the upcoming concept album ‘The Days The Clock Stopped’ which will become a multi-media product that spans this album, an hour long documentary and an extensive booklet that all tell a dark medical story based on real life experiences.

The album is slated for release worldwide on the 4th of December 2020 in a physical CD/DVD digibook form and through online streaming services worldwide.

If you want to contribute to this albums’ process, a special pre-order webstore has been opened at the TDW website, where the album can be preordered with multiple pre-order bonusses attached. Check out the pre-order campaign here: https://www.tdwmusic.com/shop