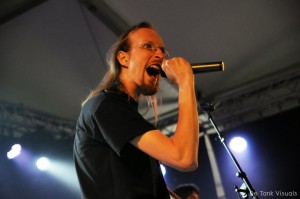 Today is a strange day, as both the positive and the negative emotions are going hand in hand in the Dimaeon camp. Vocalist Ferdinand Wanders issued the following statement this morning:

“…On friday 13th 2015 – after 13 years of loyal service – I resigned from all my duties in Dimaeon. For a dozen years I was always eager to hit the practice room, studio or stage, with full power and 666% commitment and unstopable energy. Achievements are abundant: we played with bands like God Dethroned, Epica, Ancient Rites and Between The Buried And Me and on festivals such as Dokk’em Open Air and ProgPower Europe. But all things end. Even the best.

My motivation dropped below zero and I have seen no improvement in many, many months. That is why I decided quitting is for the best for me, Dimaeon and their upcoming record. I am convinced that a new and better vocalist will be found (I think I’m rather a passionate performer than a really good singer). Through the Metalization Foundation I will continue to support Dimaeon and I’m looking forward to attend my first gig as a fan of this great, skilled and versatile metal band. Thank you all for the good years!”

The band has put out a message to the fans saying that they will continue and that they will start singer auditions and the search for a new frontman as soon as possible to fill Ferdinand’s place. 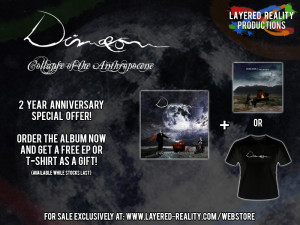 But besides this sad news, celebrations are also in order, as Dimaeon‘s debut-album entitled Collapse of the Anthropocene has reached it’s second year of existence!

To properly celebrate this occasion, Dimaeon and Layered Reality Productions have now decided to make a special offer in which fans can order, the album for the regular price of €10, BUT they can get a free T-shirt or a copy of the band’s first EP Exit Reality as a complimentary gift!

This is a VERY LIMITED offer and stocks are available while they last, so react quickly!