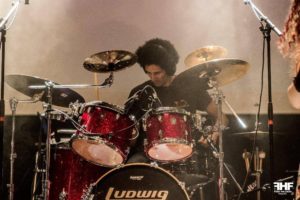 Sad news reached the Layered Reality mailbox today, as ReSolve parts ways with their drummer Gregory van der Hoeven. (Picture by Fred Helders.) The full statement as posted by the band can be read below:

“…Dear all, It is with heavy hearts that we announce that our drummer Gregory van der Hoeven and ReSolve have parted ways.

Greg was one of the founding members of ReSolve back in 2010 and has been a vital part of the band since then. We have been through a lot together as a band, both good and bad times, which we will never take for granted. We have written, recorded and released our first album, but also signed our first record deal together and shared the stage numerous times.

However, due to changing lives, goals and ambitions, we have mutually decided to part ways as the buddies we have always been and will continue to be. Greg, we cannot thank you enough for all you’ve done for us over the past six years and wish you all the best in your current and future endeavors!

We want to emphasize that this split does NOT mean the end of ReSolve! We are currently in the very beginning stages of the writing process for our second album, which will continue throughout 2017. Stay tuned for updates!”

ReSolve’s second album will be released through Layered Reality Productions once it is done. More updates will be given once they are available.