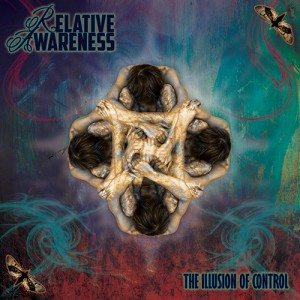 After announcing a releasedate and a plan for the debut-album at the end of May, Relative Awareness now released a status update on their facebook page with a slight change of plans.

Here is what the project’s main protagonist Jelle Hamstra had to say about it:

“…Finally I can give you all an update again! A lot of work is done on the Relative Awareness album right now and we are slowly but surely reaching the end of the process. This album is becoming very heavy and I am looking forward to sharing it with all of you!

However our original plans to release the album in July have changed quite a bit. We decided to push the release date forward because of various reasons. The holidays are a factor of course, but I don’t want to be hasty with the mixing and mastering process. This record needs to be right! So to make sure the record becomes as good as it should be, the release date will now be moved to : 01-09-2014

Finally we can now also share the awesome artwork with you made by Janneke Smids for our upcoming album: The Illusion Of Control. Words can’t describe how happy I am with the end result. I couldn’t ask for anything better than this!…”

More information about Relative Awareness’ album will be shared once it is available.

More on the artwork made by Janneke Smids can be found on her Facebook page.

For more information regarding Relative Awareness’ album you can check the earlier newspost unveiling the tracklist, musicians and other details here: