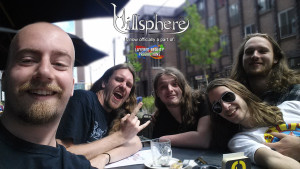 This week starts of with great news as the Progressive Post metal band Hillsphere has now become a part of the Layered Reality Productions family!

Hillsphere is a band based in the Amsterdam area (The Netherlands) which specializes in instrumental metal that takes influences from post-rock, Progmetal, ambient popmusic and much more. Their compositions can be described as musical adventures in which you are taken on a journey that goes from tranquil intimate sections to intense metal outbursts.

The band consisting of Elias Mayer (Synths/Guitars), Eren Özilhan (Guitars), Tom van Hogen (Bassguitar) & Jorn van der Wal (Drums) has been working on songs and playing live gigs to get themselves ready to record and release their debut-album.

Hillsphere will continue working on their debut-album this year which will be released by Layered Reality Productions in late 2015/early 2016. This album will be produced by the band themselves and will be mastered by Pieter-Bas Borger. (Known from Embion among other things.)

More news and material from Hillsphere will follow when it is available and in the meantime you can listen to the song Clairvoyance on Hillsphere’s soundcloud page and on the Layered Reality Soundcloud page.