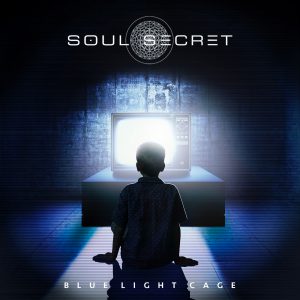 It’s time for a new chapter in the story of Italian band Soul Secret, as the band will release their brand-new album “Blue Light Cage” to the world on the 23rd of October 2020!

The band showcases their trademark melodic progmetal sound on their fifth record, exploring their sound more than ever before. Ranging from more intimate calm musical moments to more groovy metal sections. All topped off with the sense of melody the band has been known for for years now.

The artwork for this record was made by long time collaborator Nello Dell’Omo, who was responsible for the artwork for the bands’ debut album Flowing Portraits back in 2008. Mixing and mastering was done by Jacopo Pettini & Alessandro Guasconi at Virus Studio in Siena (Italy).

Featuring guest solo spots by the likes of Derek Sherinian (Sons of Apollo, Planet X etc) and Marek Arnold (Seven Steps to the Green Door) among other new musical ideas brought in by all bandmembers, this album is one that will both delight and surprise new listeners and long time fans!

The album will contain the following songs:

Be sure to check this space in the coming weeks, as more info will be coming soon!