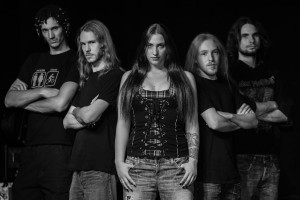 And we start of the first week of 2014 with sad news as ReSolve has parted ways with their lead-singer. Here is the statement the band released on their Facebook page earlier today:

It is with grief that we have to announce that ReSolve has parted ways with vocalist Chrissy Spruijt. This decision has been quite a blow for us as a band and we cannot stress enough that this has been an incredibly difficult one.

We want to emphasize that we are very grateful for all Chrissy has done for the band over the past year. However, due to circumstances beyond our control, we reached the point at which we came to the conclusion that it would be best for both parties to go separate ways.

We wish Chrissy all the best in her future endeavors and hold no personal grudge against her. Plans for the band’s future are yet to be decided upon, but let it be clear that this does NOT mean the end for ReSolve. We will carry on and continue making music together, because that is what we love to do most!

More information regarding the band’s future will follow soon.

ReSolve will remain a part of Layered Reality Productions and is now working on their first release. More details about the future course of the band and their musical direction will follow in the coming weeks.