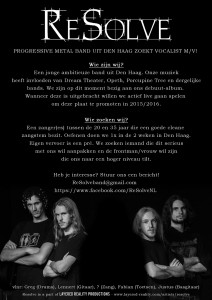 After announcing the arrival of singer Leon Yánez in early 2014, the members in ReSolve unveiled surprising news that this singer has left the band again.

Here is what the band had to say on this matter:

“…We won’t beat around the bush, ReSolve is in search of a new lead vocalist M/F!

Our good friend Leon Yánez, who joined the band earlier this year, has to step down as vocalist for this band due to personal reasons.
The split was amicable and we wish Leon all the best. So now, onward to the future then:

We are now IMMEDIATELY looking for a replacement!

Work on our debut album will continue as well, and we are preparing for the second leg of recording right now. More details regarding vocal auditions and the album will follow as soon as we can share them. Stay tuned!…”

For interested candidates, a poster has been released (written in Dutch) explaining the situation and what the band expects from candidates. This poster can be found on the right a nd may be shared freely! ReSolve’s debut-album will be released through Layered Reality Productions once it is completed.