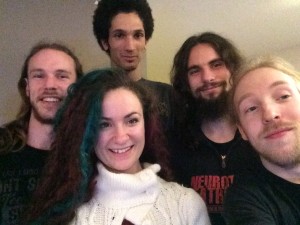 Happy news from the guys in ReSolve as their search for a new frontman/woman is finally over! Today the band announced that they have attracted a new frontwoman that goes by the name of Radina Dimcheva!

“…Sinterklaas/Christmas/Hannukah came in early for us this year! After half a year of painstakingly searching and several rounds of auditions, we can now finally announce that the search for our vocalist is over!

We have found a new front-woman in Ms. Radina Dimcheva!

Radina is a Bulgarian born singer who now lives in the Netherlands. Her musical influences range from Rock to Metal to Pop to Prog. Some of you might know her from her work with the Epic Rock Choir led by the mighty Arjen Lucassen!

Radina heard our music and loved the musical direction and vocal challenges that it posed, so we can only say: Welcome to the family Radina! We are really looking forward to working and having a great musical time with you! 😀 …”

ReSolve will be releasing their debut-album through Layered Reality Productions in 2015. More information about ReSolve and their album will follow in the coming months.