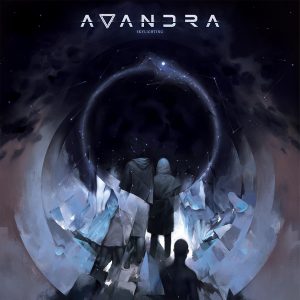 This autumn is about to become more and more exciting, as Avandra has now announced the title, tracklist and coverart for their upcoming album! The album shall be called Skylighting and features 7 brand new songs. The four core bandmembers, were joined this time around by keyboardist extraordinaire Vikram Shankar (Redemption, Silent Skies, Lux Terminus) who provided additional layers to the songs.

Production duties were shared by Christian Ayala and Daniel Schwartz (Astronoid) and mastering was in the hands of Jamie King (Between The Buried And Me, Scale The Summit, The Contortionist and more). The symbolic, spacey artwork was made by Mark Facey.

The band’s singer and guitarist Christian Ayala had the following to say about this album:

“This new album is the response to our current situation in the world due to everything that has happened to us. It became a voyage of loss and return through cosmic cycles in which I both searched inward and outward, combining my love for philosophy and current events into songs. We are really excited to share this record with all of you guys!”

The album will feature the following tracklist:

This album will be released worldwide on the 20th of November 2020 through Layered Reality Productions on both CD and digital formats.

Stay tuned for more information and updates in the coming weeks!