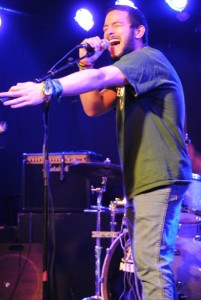 The progrockers from ReSolve have announced some very happy news today as they have found a new singer and also announced a big change of plans! Below you can read the press statement that the band has sent out:

“Dear folks and folkettes! We are proud to announce that we have found a worthy addition to our band for the vocal position! We proudly present to you all mr. Arturo Yánez!

Yes a guy! We feel that our music (or music in general) should not be limited to gender, race or any other confinements, but also found that our music works extremely well with a male voice. Arturo recently joined us in the rehearsal room for an audition and simply blew us all away! He proved to be a natural fit with our music and his powerful voice complements our sound perfectly. We are sure that his contributions will move the band forward both in terms of song-writing as well as live performances!

Also, as you might’ve noticed from our previous post, we have quite been busy writing new material. This has to do with us making a big decision recently. Instead of working on an EP, we have turned our plans into creating a FULL-LENGTH DEBUT ALBUM! We are aiming to release the album at the end of 2014/ beginning of 2015. A bunch of the tracks have already been recorded, as these were meant for what would be the EP. However we have shifted back into the writing process to add more tracks and make this album worth the wait. Arturo will join the band in the flesh at the end of June. This means that there will not be many gigs for us this year, but it leaves us enough time to complete and release as good an album as we possibly can…”

ReSolve will continue working on their debut-album which will be released through Layered Reality Productions in the near future. To stay on top of ReSolve’s updates, you can like their Facebook page @ www.facebook.com/resolveNL