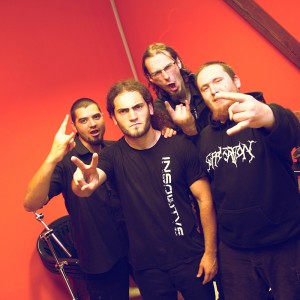 The men from Insolitvs have been locked away in the writing studio for quite a while now (beside the few gigs they played in 2014) but the band suddenly broke the silence this morning with some sad news regarding one of their forming bandmembers.

“…Mondays generally suck balls, and today is especially shitty. We have to put out a piece of news that doesn’t sit well with any of us – the news being that, after 10 years of playing, being pals and screwing around, Gogo (Gordan Vrbanec) is leaving the band.

The reasons are of medical nature; the consequences are yet to be seen. The three of us wish Gogo the absolute best, especially with his health.

Notices like these are utterly dumb, as dumb as trying to verbalize the fact that from now on we won’t be playing with the guy who’s played with us since the very beginning…

And because of that, we won’t be looking for a “substitute”. From now on Insolitvs is a trio. We have no idea where this will take us, but to be honest – we had no idea where the band would take us when we started it, so at least that stays the same. As for everything else – who knows. See you (soon) on the roads…”

Insolitvs will proceed working on new material in the coming months.